It was announced back in February 2021, but no one actually knew what it looked like. The PlayStation VR2 was finally unveiled by Sony on 22-02-22. Time to get acquainted with the next generation VR headset.

We already knew what the controllers were going to look like back in March 2021, but the rest of the PlayStation VR2 still remained a secret. Thankfully, almost a year later, that’s about to change. Sony is revealing the design itself via a post on the PlayStation Blog.

The PlayStation VR2 not only looks a lot like its predecessor, but also definitely like the PlayStation 5. Like the popular console, the headset also features a black and white color combination and the logo is subtly displayed on the product. Other than that, there isn’t a whole lot to discover in terms of novelty to the design itself. Of course, this does not mean that the headset has not been improved. 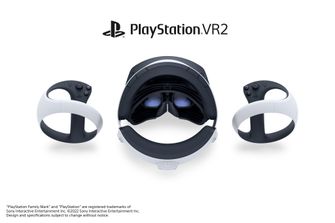 There it is! (Image: Sony PlayStation)

Unlike the model that appeared five years ago, the PlayStation VR2 is a bit lighter. In addition, the new model has a renewed dial to adjust the headset and it ventilates better. Of course, it is mainly the improved specifications that make the new model from 2022 interesting. For example, the PSVR was still usable on the PlayStation 5, but you had to put in some effort.

The PlayStation VR2 supports 4K HDR, 90/120Hz refresh rate and haptic feedback. Of course, the headset is easy to connect to your PlayStation 5. This can be done through a single USB-C cord.

Not everything known yet

In February 2021 Sony announced that the new headset was coming, in March of that year we were introduced to the controller. In January 2022 we learned about the name PlayStation VR2 and so in February 2022 it’s time to admire the design of the device. You would expect, a year after the fact, that all the information would be on the table by now, but nothing could be further from the truth.

Exactly when the PlayStation VR2 will appear and how much it will cost is information we don’t have at the moment. Hopefully Sony will change that soon.