This week we can let loose with Horizon Forbidden West. An absolute top game, which shines on the PlayStation 5, but is also just playable on the PlayStation 4. And if you like the game and you are a fan of LEGO, we have good news.

Just before the release of Horizon Forbidden West, LEGO has announced a cool set in collaboration with the developer. This one is still a while away from us, but we get to enjoy it now.

The LEGO set of Horizon Forbidden West is scheduled for release in May of this year. It is a set that will cost $79.99 and can be ordered here. It’s a set that consists of 1,222 bricks and is mainly about height. Namely, you can start building a huge Tallneck. In the game you come across them and you can climb them. If you succeed, you will get more information about the environment where you are and discover where certain enemies are located. In addition to the huge set, the set also comes with a figure of a Watcher and a minifigure of the heroine of the game: Aloy. 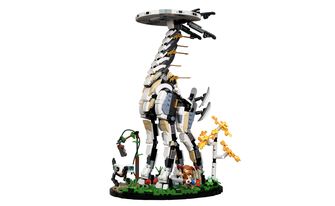 Aloy is further equipped with a spear and a bow in this LEGO set. With the Watcher, you have the choice of providing him with blue, yellow or red eyes. In this way you show to what extent he detects danger. The Tallneck himself has his large satellite-like head sticking out above his neck. He is ultimately 34 centimeters high, 23 centimeters wide and 17 centimeters deep. In that respect, it is a nice piece to place in your room. 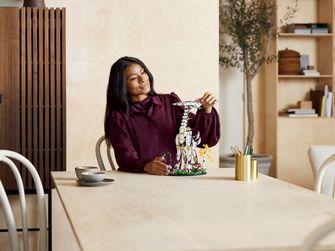 Finally, it is also nice to see that this LEGO set of Horizon Forbidden West has various details on the ground. For example, there you will find a birch tree and various rusty objects. There is also room for tall grass, just like in the game. Want to know what we think of the game? Then read our review here.