Games get a lot better thanks to this upgrade

With your Xbox Game Pass, you have a large library of games that you can get in. But perhaps you only have an Xbox Live subscription. If so, you still get about four games for free every month under the heading of Xbox Games with Gold.

On their own website, Microsoft has revealed what the new games are for June. As always, with your active subscription, you get about four games that you must claim within a certain period of time. As long as your subscription is then running, you play them for free.

Two of the games are for the Xbox One and, of course, playable on your Xbox Series X. In Aven Colony You have the task of building a new world, so that humanity can live there. In doing so, you’ll have to deal with harsh weather conditions, but there are also alien life forms that can make sure you have a tough time. And then you have the task of keeping the population happy. Because people can be extremely nagging. The game will be available from June 1 to June 30. The second game also has to do with building. In Project Highrise: Architect’s Edition In Project Highrise you go to work in the city and build various skyscrapers. It’s up to you to make sure you build everything right and also think about how a building will allow people to work in it or attract tourists and earn money that way. Between June 16 and July 15, score the game. 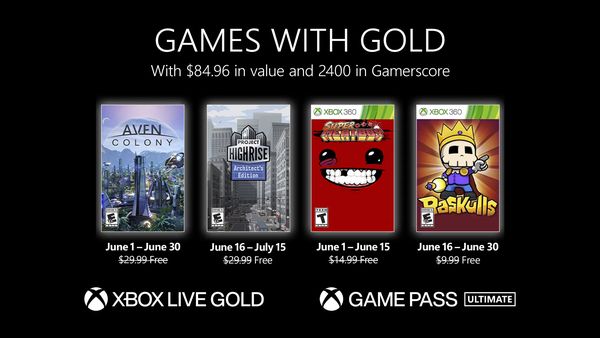 Then the Xbox 360 games you’ll score this month with Xbox Games with Gold. The first in there is Super Meat Boy. A game that is really super spicy and therefore especially suitable for gamers who can deal with disappointment and at the same time like a challenge. In the platform game you have to deal with bizarre obstacles and it’s up to you to overcome them. You can score it from 1 to 15 June.

The latest game to arrive via Xbox Games With Gold is Raskulls. It’s a fun adventure game that’s perfect to play with friends on the couch or online. Between June 16 and 30 score the game.