That Apple has been around for a tremendous amount of time is nothing new. In all these years, a huge number of products have been developed, some of which have stayed under the radar. Thanks to this great calendar you get to know more about them.

Now meet Apple History, a 2023 calendar designed specifically for first-time Apple fans. The calendar tracks all of Apple’s major release dates and gives you insight into the tech giant’s history. All while enjoying surprising images of software you’ve never seen before. You won’t want to miss this!

Journalist Stephen Hackett developed the project and shot the images. He launched Apple History this week and since then has already gathered more than 700 donors, who combined to raise a total of more than $30,000. Within just one day, the project managed to reach the goal of $4,983.

“I have been involved with Apple and its history for years, even longer than I have been a podcaster or a blogger. I have a collection of nearly 200 Macs and other products that the company has launched over the years. From the early days before the Macintosh to the current era of iPhones and beyond, Apple’s software story is one of care and craft… and the occasional oddity.” – Stephen Hackett

Buyers get digital copies of the photos and the ability to digitally store the dates in the calendar in addition to the calendar. According to Hackett, the calendar is 51 by 33 inches and will ship this fall. Hackett created a similar calendar for 2022 last year filled with hardware highlights, including the launch of Apple’s best iPhones, iPads and Macs. So hopefully we can expect a flashy calendar for 2024 as well. 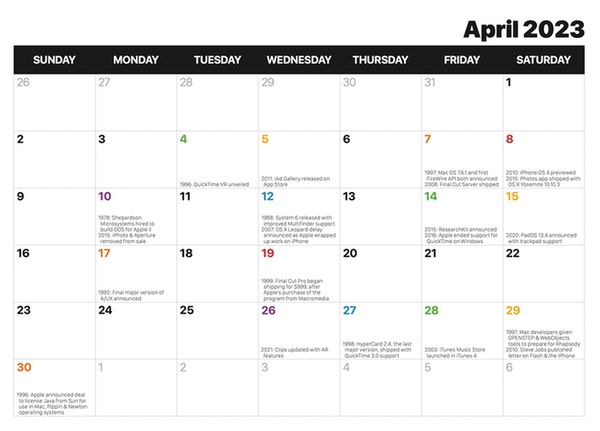 This is what the calendar is going to look like (Image: Stephen Hackett)

So Apple has been around for decades and in that time has managed to accumulate a towering fortune. In Q2 of 2022, the company even managed to set a record with revenue of $97.3 billion. And that’s a huge amount even per second. Tipalti has, in fact, figured this out to perfection. In this article we tell you what his findings were.