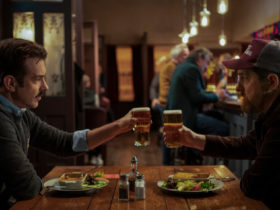 The BAFTAs are Britain’s most important film awards and a good indicator of the Oscars. So the fact that Apple TV+ picked up two awards there is a great result for the streaming service. Still, an award that doesn’t seem particularly special at first glance makes the award extra special.

Apple TV+ wins at the BAFTAs

During the BAFTAs, Apple TV+ film CODA was in the spotlight. Actress Emilia Jones got to sing Both Sides Now, which she also performed in the film. That was just the beginning. What made it extra special for the streaming service was the award for best supporting actor for Troy Kotsur.

Normally the award for best supporting actor is not very special. Of course it is a nice achievement, but it is not as special as the award for best actor or actress. Yet this title can now be called special, because Troy Kotsur is, in fact, deaf. He is the first person with that condition to win the award.

Kotsur’s award is not the only BAFTA that Apple TV+ and CODA have won. The film also won the award for Best Adapted Screenplay. These are not the first awards for CODA, as it also managed to win awards at the Screen Actor Guild Awards, SAG Awards and Hollywood Critics Association Awards. Still, people are especially looking forward to this coming weekend. The Apple TV+ film has been nominated for several Oscars.

CODA is now available to watch on Apple TV+. The film is about 17-year-old Ruby being the only hearing person in a deaf family. As such, she is a CODA (child of deaf adults). In this capacity, she often has to act as an interpreter for her parents and also works on the family’s fishing boat every day before she goes to school. When Ruby joins the school choir she discovers her talent for singing and this forces her to make a difficult choice. Her singing teacher encourages her to take a special singing course at a prestigious school, while she herself feels a moral obligation to help her family. Will she dare to make her own dreams come true, or will she choose to remain loyal to her family?