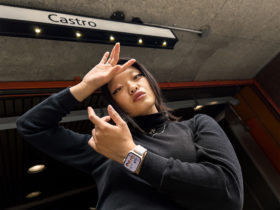 Apple TV+ wants to be hip, so it’s coming up with its own TikTok challenge, as part of its new series called The Afterparty. In that series, the characters have to deal with a murder during a reunion. After watching eight episodes, the viewer should know who the culprit is, while constantly watching the story through the eyes of another suspect.

The official TikTok account of Apple TV+ wants to playfully promote the new series The Afterparty in this way. TikTok users are asked to participate in the #DuetDoWet, a fictional single. Meanwhile, the sponsored hashtag already has more than 85 million views to its name on the platform.

This is not the only way Apple is promoting the brand new series. Lately, more promotions have been popping up on various channels on social media. Posts about The Afterparty seem to be piling up at a rapid pace. This murder-mystery features a lot of humor in addition to the reveal.

The series is about the death of a famous pop star named Xavier. This is the same man who is also central to the marketing campaign. The company even launched a separate EP on Apple Music from the artist, to give the whole thing a little more gravy. You can find all the music from that short album on a dedicated page.

The show is written and designed in a specific way so that as a viewer you are more likely to know who the culprit is than the characters in the series. There may even be hints in the fictional pop song by the fictional artist Xavier. So if you think this kind of stuff is cool, then you can’t go wrong.

The Afterparty has been available on Apple TV+ since January 28. Then you immediately watch the first three episodes. As mentioned, eight episodes will appear in total, giving you some time to figure out who the culprit is. And who knows, maybe the creators will release more ideas outside of the show.