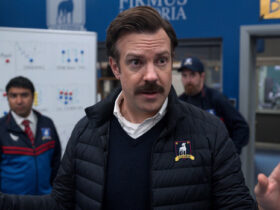 Ted Lasso, Apple TV+’s successful comedy series, is having a positive impact on tourism in London. Many fans of the series are moving to the south-west of the metropolis to take a little look at Richmond.

This is announced by Gareth Roberts, chairman of Richmond Borough Council, in the local edition of Time Out.

AFC Richmond, the soccer club at the center of Ted Lasso, is a fictional club that plays in the Premiere League. The location where that club is based, Richmond, is not, by the way. This affluent residential area is situated on the River Thames, has actually been used as a film location and is now wildly popular with tourists. So it becomes clear in Time Out.

Gareth Roberts, chairman of Richmond Borough Council, could hardly look back with more satisfaction at Ted Lasso. Indeed, the Apple TV+ series is causing quite a few people to flock to his district.

“In times when we were really struggling, ‘Ted Lasso’ gave us the boost we needed,” he said.

Indeed, Gareth reveals that fans do indeed come for the film locations, but end up sticking around for the stores. “People may have reservations about a big company like Apple investing in an area like Richmond,” he tells the paper. “However, the investment they made affects all independent businesses. Ted Lasso puts a smile on our faces”

Apple TV+ certainly not the first

While the name Richmond may not initially tell you much, there are many companies that went before Apple TV+. So Ted Lasso is certainly not the first content shot in the peaceful village. In 1966, the town hall was used for the film ‘Alfie’ and Twickenham Film Studios was almost a home base for film director Stanley Kubrick.

According to Roberts, this is very nice, but not very surprising. “American companies like to capture an idyllic and picturesque image of London,” he reveals. “Well, then you quickly end up with Richmond. It is the image Americans have of London when they close their eyes.”

Those interested in admiring Ted Lasso’s home base can leave directly from the airport. From London Heathrow Airport it is a short twenty minute drive. If you go by public transport, it will take you about 45 minutes.