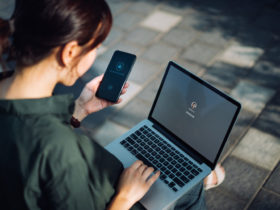 How Apple, Google and Microsoft envision a life without passwords

In the third season of For All Mankind, Apple fans suddenly came across an old familiar. The Newton MessagePad 120, originally launched in 1993, popped up in a completely new look!

For All Mankind is set in an alternate timeline, where technology was developed significantly faster than it actually was. How did the creators manage that?

Apple Newton MessagePad 120 in For All Mankind

The Apple Newton MessagePad 120 was a personal digital assistant that was also called a PDA. The device featured a stylus and had useful features such as handwriting recognition. Under the hood was an ARM 610 RISC processor and the entire device ran on Newton OS.

An extraordinary product, but the Apple MessagePad 120 did not last long. In 1998, shortly after Steve Jobs returned to the company, it came to an end. So the personal assistant left the stage again after five years.

Help from the iPhone 12

In 2022, that Apple Newton MessagePad 120 suddenly reappears. In the third season of For All Mankind, Apple TV+’s alternative history series, the device is in full use. Though in this timeline, it’s a lot more advanced than it was in the real 1990s. Just as we use our iPhones for FaceTime today, the characters in the series already do.

On Twitter, Ben McGinnis, part of the team behind For All Mankind, reveals how this unique product came about. What does it reveal? The screen of the Apple Newton MessagePad 120 seen in the series is actually just an iPhone 12 Pro Max.

Tech advances faster in 1990s @forallmankind_ alt-history! All us @Apple nerds had a blast creating (& playing with) our modified Newton’s removable camera & video calls! Props even fit an #iPhone 12 Pro Max inside. The #Newton POV angles in the show were #shotoniphone #Apple pic.twitter.com/wASQcG7Qw9

A removable camera can be found on the top of the custom Newton MessagePad. This one doesn’t do anything, however, as the iPhone 12 Pro Max’s selfie camera is used to capture the image. Whether the team behind For All Mankind was also using FaceTime is not made clear by McGinnis’ tweet.