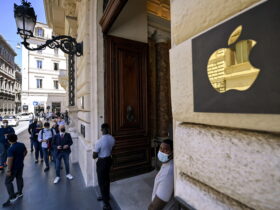 Apple’s quarterly figures are out: it can’t complain

It looks like J.J. Abrams is working on a live-action version of an iconic childhood series for the streaming service Apple TV+. The news has not yet been confirmed, but Abrams will reportedly be the executive producer. Additionally, it is not yet known when the series will debut on the Apple streaming service.

The series in question is Speed Racer, which previously had a live-action film. Before Speed Racer became an animated series (or anime) at all, it was a popular manga in Japan. In the 1960s, the series finally made its way to the West, winning many new souls at once.

Variety now lets us know that Apple TV+ will thus get a live-action series of Speed Racer. The series has reportedly already been ordered, which means it will be put into production. Ron Fitzgerald and Hiram Martinez will be both writers and showrunners. Fitzgerald was most recently responsible for the remake of Perry Mason.

He also worked on both Weeds and Westworld. Martinez wrote, among other things, The Last Ship and episodes for Get Shorty. Abrams really needs no introduction, but was responsible for the series Lost, among others. He also recently made both Star Trek and Star Wars films.

What is Speed Racer about?

Of course, you may be completely unfamiliar with Speed Racer. That can be an advantage, so you can be surprised for when the series debuts on Apple TV+. But we can imagine you want to know a little more. Speed Racer is about a professional race car driver named… Speed Racer.

Speed Racer travels all over the world to participate in various races, which can be quite dangerous. In doing so, he gets help from Pops Racer and Sparky, his mechanic. He himself drives a car called the Mach 5 which is equipped with all sorts of high-end gadgets. He also has a girlfriend named Trixie, a little brother named Spritle and a pet chimpanzee aptly named Chim-chim. Because why not.