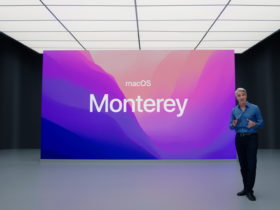 How macOS 12.2 is causing your battery to drain like crazy

Apple TV+ has managed to secure the rights to a series from the Legendary MonterVerse. That’s a fictional universe that the movie Godzilla vs Kong, for example, is set in.

Exactly what the new series of Apple TV+ will be called and when it will appear is not yet known. However, we are already getting a small taste of the story that will be followed.

In 2014, we were first introduced to Legendary’s MonsterVerse. The happened through the movie Godzilla, which was followed up in 2017 by Kong: Skull Island. Then in 2019 we got to see Godzilla: King of the Monsters and in 2021 the most recent part appeared in the form of Godzilla vs Kong.

The Apple TV+ series will be produced by Legendary Television. The studio is bringing in Chris Black (Star Trek: Enterprise) and Matt Fraction (Hawkeye) to do the job. As mentioned, the series doesn’t have a name yet, but Apple is already letting you know on its website what it will be about.

“After the impressive battle between Godzilla and the Titans and the reality that monsters really do exist, a family sets out to find hidden secrets. In that search, they find an inheritance linked to a secret organization known as Monarch.”

Not a bad match

Legendary’s MonsterVerse and Apple TV+ is certainly not a bad match. After all, the streaming service already has plenty to offer in terms of science fiction. Consider, for example, the series Foundation which is based on the legendary story by Isaac Asimov.

Of course, For All Mankind, Dr. Brain and Swan Song also entertain fans of the genre.

Apple TV+ achieves quite a bit of success

It won’t win the battle of streaming services, but Apple TV+ is actually doing quite well. In fact, the content being produced is better than on any service in the market. This is certainly reflected in all the awards that the movies, series and documentaries are winning.

For example, Apple TV+ was recently nominated for no less than 6 different Writers Guild Awards. Want to know more? Then be sure to read the article above!