If the latest rumors are to be believed, Apple is still working on a new version of the Mac mini behind the scenes. One would almost expect the Cupertino-based company to phase out the compact computer. After all, the recently announced Mac Studio could fill the role of a mini just fine, if it had to.

The Mac Studio looks like some sort of combination of a Mac Pro and Mac mini. So it wouldn’t even be such a crazy idea. But the editors at 9to5Mac are now claiming that the mini is not going away for the time being. In fact, an upcoming version of mini-computer may feature the as-yet-unannounced M2 processor, which has already been the subject of much controversy.

The rumors don’t stop there. Because Apple is reportedly working on two versions of that M2 chipset, namely also an M2 Pro. And consumers could equip the new Mac mini with one of those two processors. Of course, Apple is not confirming this news; the company is now focusing on the M1 Ultra in the Mac Studio. 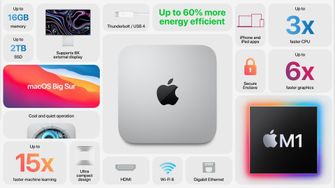 Some unconfirmed information is already available about the regular M2 processor. The chipset will get a cpu of eight cores, but they are a bit faster and more efficient than in the M1. In addition, the gpu will have access to nine to ten cores. Within the M1 chipset, we find seven to eight gpu cores.

According to 9to5Mac, Apple had further plans to announce the new Mac mini earlier and equip it with the M1 Pro and Max chips. But the small computer had to make way for the Mac Studio, logically. Again, these are rumors; we will probably never know what Apple’s real plans were.

A lot has been written about the upcoming Mac mini. Earlier it came out, also via rumor mongers, that the computer will have a new design. Think of a smaller chassis, a top made of Plexiglas and color options consisting of two different colors.