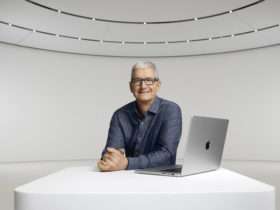 Apple TV+ has already built up a nice library of movies and series. Now Now and Then is joining it. Here’s what you can expect from the show.

If you’ve already cranked up Apple TV+ today, you may have noticed a new series. Starting today, you can watch Now and Then on streaming service. The first three episodes are on there now, and a new part will be added every week until it ends on June 24.

Now and Then on Apple TV+

Apple TV+ itself describes the series as follows: “Now and Then is a multi-layered thriller that explores the difference between young people’s dreams of the future and the reality of being an adult. The story takes an unusual turn when a group of college friends wake up next to a weekend party. One of them is no longer alive.

Now, 20 years later, the five remaining friends are back together because a danger lurks. With it, their perfect worlds are at stake.

Now and Then can rightly be called special. Perhaps the story does not sound so special, but the execution of the series certainly is. Both English and Spanish are spoken in the series, which therefore brings a special dynamic.

You can see that dynamic right away in the trailer. You see the accident and the problems that arise later. There are also quite a few exciting moments that promise a lot.

Now and Then has a large cast of Spanish speakers. Among others, we see Oscar nominees Marina de Tavira and Rosie Perez. José Maria Yazpik, Maribel Verdu and Manolo Cardona also have roles to play in the show.

Prefer to watch something else? There’s plenty to choose from on Apple TV+, of course. For example, last week the series The Essex Serpent premiered. The lead role in the series is for Tom Hiddleston who you may know as Loki from the Disney+ series of the same name. In addition, there is also a major role for Claire Danes.