The “Silent AirTag” popped up in online shops like Etsy and Ebay. It is a modified version of the Apple AirTags in which the built-in speakers are deactivated. Anything but safe, in other words.

This modification makes the Apple AirTags the ideal gadgets for malicious people. Something the vendor is likely to be very comfortable with, as the trackers are not cheap.

Consumers could get their hands on a modified version of the Apple AirTags via Etsy or Ebay. For a fee of $77.50, you could become the proud owner of a “Silent AirTag. It’s the exact same tracker Apple sells with the same Find Me support, but without a working speaker. Why? So that the person you tracked has no idea he or she is carrying one. 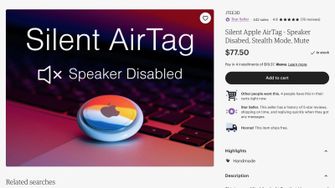 These special Apple AirTags are an incredibly convenient way for criminals or stalkers to track their victims, undetected. Something the seller, who operates with the pseudonym JTEE3D, had “not thought about”, in his own words. He told PCMag that he put the modified version up for sale because there was a lot of interest in such a product. It was mainly people who wanted to attach it to their pets, bikes or tools.

“Despite the fact that I believe this product can be used in many positive ways, unfortunately there are also negative ones. I am now aware that the latter outweigh the former.”

Meanwhile, the “Silent AirTag” is no longer for sale on Etsy and on Ebay. Before the seller decided to take his product offline he did manage to sell almost 500 copies.

Exactly the concerns of users

This kind of practice is exactly the reason many people have railed against Apple’s AirTags. The handy trackers are great for finding stuff, but are also solid to use for not-so-good purposes. So that’s the whole reason Apple released a safety manual, so consumers know how to use the trackers properly.

Earlier this week, word came out that a man had been arrested for trying to use Apple AirTags to stalk someone. You can read that report at the link above!