A tradition during WWDC are the Apple Design Awards. The following apps are in the awards, including a Dutch one.

The WWDC 2022 is in full swing. During Apple’s developer conference the company announces many novelties. The most important we see in the new operating system iOS 16. But in addition to announcements, app creators are especially in the picture. One way of putting app creators in the spotlight is the Apple Design Awards. With these, the company shows the best apps and games in their class.

Apps and games are both awarded in six different categories: inclusivity, entertainment and fun, interactivity, social impact, graphics and visuals, and innovation.

This year a Dutch creator also falls into the award. This honor goes to Volst that created the app Odio. They win the title for app in the innovation category. The app contains lifelike environmental sounds such as waterfalls and roaring rivers. These are made even more realistic by spatial audio and head tracking. The beautiful interface provides futuristic animations that move in sync with the sound. It provides an impressive audio-visual experience, according to Apple. 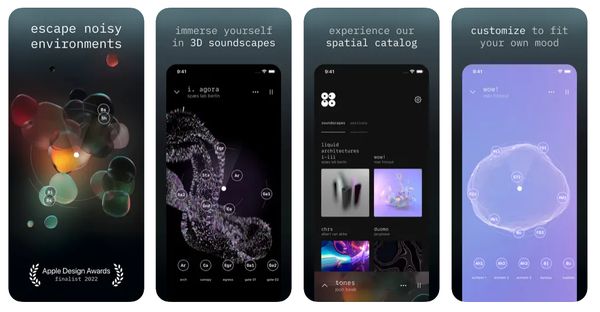 Odio on your iPhone. (Image: Apple)

The best apps according to Apple

But of course, in addition to the Dutch company, there are eleven other great apps that Apple says are definitely worth trying. One of the best-known names in the list is perhaps that of Procreate. With this app, artists and designers can completely unleash their creativity. The app now has even more features such as filtering of vibrations and movements and audio feedback for color blindness. So even more people can enjoy the app.

Are you a little less creative and want to keep track of your habits? Then (Not Boring) Habits might be an option. This app funnily transforms your habits into an artistic experience.

Apple thinks these are the best games

In the categories among games, we see several fun names. For example, you see Lego Star Wars and Marvel in Apple’s list. Overboard is the game that manages to win the award in the entertainment and fun category. In this crime game you are not the detective but the murderer. Through clever conversations you must stay out of sight of the justice system. You can replay the game several times because there are different outcomes.