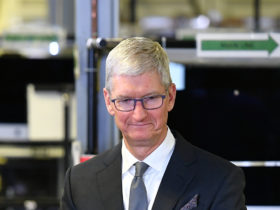 Why Apple should probably pay billions to the EU

Those who are hesitating between the current Apple Watch Series 7 and the upcoming Series 8 might want to wait for developments. The new model will reportedly get a pleasant upgrade.

Last year there was already talk of an Apple Watch with a new design. In this particular case, it was a model that worked not with round corners, but square corners. In the end, this design was not used, but that could change this year.

In this regard, like last year, consumers can expect a larger screen. This is what not only reliable source Ross Young let us know on Twitter, but is also the information that analyst Jeff Pu presented to investors. The editors of MacRumors say they have that information in their hands.

The Apple Watch Series 8’s display is expected to be about 5% larger than its predecessor. Whereas the current model (45mm) carries a 1.691-inch display, the new model will have a 1.99-inch screen.

Who is Ross Young?

Ross Young is the CEO of Display Supply Chain Consultants, also known as the DSCC. Because of his wide network, he knows a lot about Apple’s future plans. Something that, with an accurate score of 92.9% on Apple Track, he does successfully.

Do you have a fever?

In addition to a larger screen, the Apple Watch Series 8 is likely to offer another new functionality. Earlier today, new information surfaced showing that the smartwatch can also measure the temperature of its user. Through this means, it would therefore be possible to determine a fever.

Curious to know exactly how this works and where the information comes from? Then be sure to read the above article we wrote about it.