At CES 2023, Samsung is showing a new prototype of the Galaxy Z Fold. That smartphone line is of course known for its foldable screens. But what else can such a device offer? Well, how about a display that you can fold in two directions. You see, that’s what this prototype can do.

Samsung Display, the division within the South Korean company responsible for this, calls this type of screen the Flex In & Out display. So this screen can be folded inward AND outward. In addition, the space between the folded screens is considerably less than on predecessors.

This is all possible thanks to the new hinge. Samsung calls this the water-drop hinge. This allows the device to assume a looser shape when you fold it (similar to a drop of water, according to the company). This also creates less stress on the screen and hinge. 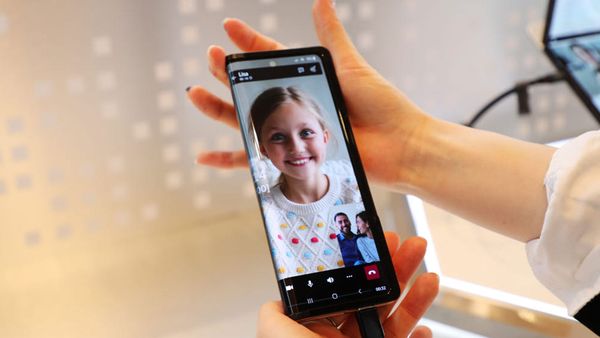 Observant readers may recognize the screen’s name. Samsung showed a Flex In & Out screen before, during the International Meeting for Information Displays event in South Korea. Back then, however, it was a screen with three segments and two hinges for folding.

Is this coming to the Galaxy Z Fold line?

Samsung has not used that type of hinge for now. All current Galaxy Z Fold models work with the same type of hinge, which the company is constantly tweaking bit by bit. So it remains to be seen when we will see this new type in consumer products; nothing is known about that.

If rumor-makers are to be believed, we will encounter this hinge in the Galaxy Z Fold 5. Indeed, those report that the gap between the two parts of the foldable smartphone is much smaller than before. Should that be true, this rumor may just become true.