It looks like Apple doesn’t have an iPhone 14 mini in the pipeline. So if you have your eye on one, then unfortunately that’s bad news. The tide can always turn of course, since we are dealing with rumors here. But for now, it doesn’t look good for anyone looking forward to a 14 mini variant.

This news doesn’t come out of the blue. In fact, a well-known information leaker on Twitter, ShrimpApplePro, published the schematics of the upcoming iPhone 14 models. In the picture we see four different models. But there is no mention of a truly small variant.

It’s not about the technical diagrams of the iPhones themselves, but about those of the cases for the upcoming phones. Case makers always try to work far ahead so they can be the first to release their cases. They often work with dated, outdated or incorrect information, so this kind of news is best taken with a grain of salt. 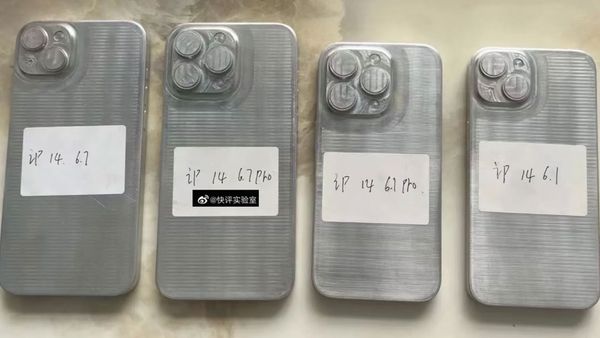 The image is from Weibo, the Chinese version of Twitter. In the picture, we can see the screen sizes listed. For example, the iPhone 14 Pro Max and Pro will have a 6.7-inch screen, while the other two models will have a 6.1-inch display. The iPhone 13 mini’s screen size is 5.4 inches, for comparison.

Striking difference on the front

We also get a taste of what we can expect from the cameras. There will be two models with three cameras and two models with two cameras. It also looks like we’ll be getting two Pro variants again. We do get a larger model of the regular iPhone. We base that on the info on the white stickers.

Finally, a user on Weibo reveals that the iPhone 14 Pro will get an exclamation point camera on the front. The front camera consists of a dash with a dot next to it, which looks something like a recumbent exclamation point. What all of this is true, then, we won’t know for several months.