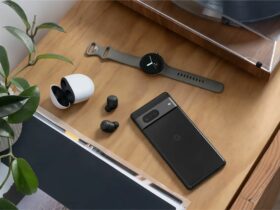 Google Pixel 7: why we in the Netherlands are excited about the event

You’ve probably noticed: today is April 1. Several companies are eagerly capitalizing on it, including Nothing.

Many companies use April 1st as an opportunity to make a big splash. Some even come up with entire marketing campaigns full of slick videos. Nothing does it differently. They use it to draw attention to their new phone and to give their competitors a little kick in the pants.

Nothing founder Carl Pei does love an April 1 joke. Yesterday during the launch of the new OnePlus 10 Pro, the man came up with some remarkable news. On April 1, he would launch a new phone. Now we see that phone appear. Of course, it is a joke, because Nothing’s first phone will come later.

In a tweet, Nothing writes: “Say hello to Another (1). You’ve seen a phone like this before. Experience the monotony from edge to edge. It’s inspiringly uninspired. Completely unoriginal. And exactly the same as everything else. I’m going to bore you soon.”

Clicking on the link in the tweet will take you to Nothing’s website. There you can also press the Buy Now button. If you do you’ll end up in another screen. There it writes, “All kidding aside, it’s easy to follow everyone, but that’s not the way we are.” You can enter your email address on the page to be notified of the real phone of Nothing. It will be released in the summer of 2022.

Say hello to just Another (1).

Experience edge-to-edge monotony. It’s inspiringly uninspired. Utterly unoriginal. And exactly the same as everything else.

Waiting for the phone from Nothing

Of course, this post is a nod with a bit of venom to other brands. The company is thereby creating high expectations for itself. It must be coming up with something special now. Yet the operating system did not seem to be new at all. It looked very much like Nothing. Perhaps this is also logical since Pei was also one of the founders of the Chinese brand.

Nothing’s new phone has a Qualcomm Snapdragon chip on the inside. Which one that is exactly, we don’t know yet. For the rest, much is still unclear about the phone. So we will have to wait a little longer.