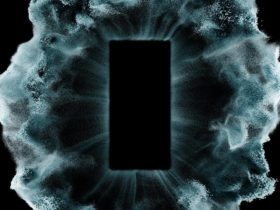 We had to wait a while for it, but during Mobile World Congress 2022 we really got the chance to get hands-on with the OnePlus 10 Pro. The smartphone was announced for the Chinese market in January this year and will only appear in Europe later this month. Is it something to be excited about?

Actually testing the OnePlus 10 Pro was not possible on the show floor in Barcelona, but I was able to play with the smartphone for some time. How good is this European version and is it worth the wait? I share my first experiences with you in this preview.

Over the past few weeks, we’ve had to make do mostly with press materials and images from other media outlets. Not very advantageous, because the OnePlus 10 Pro looks like a pretty hefty smartphone. A feeling that is especially evoked by the large camera block on the back. On that note, there is good news: in real life it is not so bad.

The OnePlus 10 Pro feels nice in the hand. That probably has to do with the matte finish used. This not only makes the device look better, but logically it is also a lot less slippery than its predecessor. Not to mention the amount of fingerprints this saves. The OnePlus 10 Pro, by the way, is slightly heavier than the current flagship, but the weight seems to be better distributed. So it’s not top-heavy, which makes it seem like it’s lighter. I can imagine that this will be pleasant in everyday use. 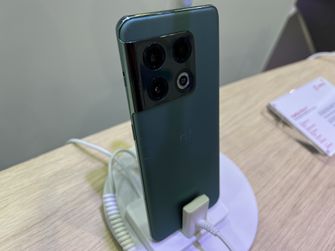 Anyone who has seen photos of the OnePlus 10 Pro recently will no doubt have noticed the new camera block on the back. Definitely a downgrade from the current flagship in terms of looks, but certainly not wrong in practice. The camera system is nicely processed and, combined with the matte finish, looks pretty good.

The OnePlus 10 Pro features a 6.7-inch LTPO AMOLED display with a refresh rate of 120Hz. This is variable, so you always have the right speed. As we have come to expect from such technology, this makes for an extremely pleasant user experience. It is difficult to see in photos, but as with the previous model, the screen is again curved on the sides. This gives the device a pleasant screen-to-body ratio of 90%.

The OnePlus 10 Pro’s display has a resolution of 1140 x 3216 and a pixel density of 525 ppi. In my limited experience with the device, it’s the quality that manages to grab attention.

The major difference between the Chinese and European versions of the flagship is the software. Whereas OnePlus leans on ColorOS 12.1 in Asia, the device in ours simply runs on OxygenOS. That’s nice, because this software, among others, has been able to ensure its success. As I am used to, the software on the OnePlus 10 Pro works very nicely. It looks slick, works fast and is equipped with the necessary exclusive features. 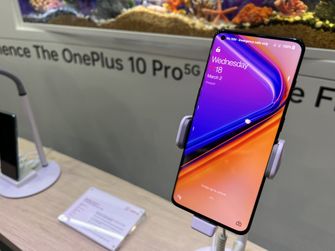 I got some experience with the OnePlus 10 Pro on the show floor of the Mobile World Congress 2022, but I didn’t really get to test the device. OnePlus didn’t let me save any photos either, so I can’t show very much of that in this preview.

It’s good to know, though, that compared to the OnePlus 9 Pro, the camera system is unchanged. The only difference is that Hasselblad has made some tweaks and is introducing new features. Think of the Master Mode or Fisheye feature.

The OnePlus 10 Pro features a 5000mAh battery that can be charged with 85W of power. Those who prefer to work wirelessly can get the charging power of 50W with a special charger. To what extent this is a success I won’t be able to say until the full review, but given OnePlus’ previous success in this area, expectations are high.

The flagship is powered by the Qualcomm Snapdragon 8 Gen 1 with at least 8GB and up to 12GB of working memory. Again, the full test will only be able to tell what this may mean in practice. 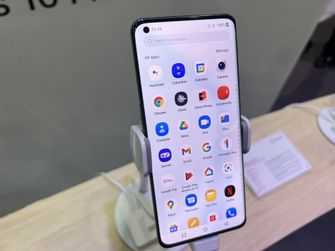 The first experience with the OnePlus 10 Pro is positive. The smartphone looks less fierce in practice than in the pictures and is very comfortable in the hand. The screen manages to impress and the other specifications do not lie either.

However, the difference with its predecessor is small. At least, at first glance. The success of the flagship is entirely dependent on its price tag and components, which I have not yet had the opportunity to fully test.

Overall, it’s clear: I’m already cautiously satisfied and positive about the OnePlus 10 Pro at this point. Hopefully the upcoming testing period will manage to convince me fully.