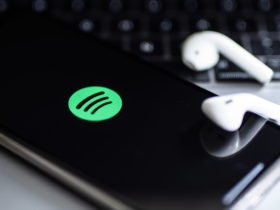 The much-discussed Spotify feature that’s on hold for now

Samsung is turning CES 2022, the world’s largest technology trade show, on its head with the introduction of The Freestyle. A smart speaker with which the South Korean company knows how to take the market to the next level.

Where a regular smart speaker is mainly focused on audio, The Freestyle is not. Samsung focuses with this small portable projector mainly on image. And it is simply fantastic.

Samsung has announced one of the most interesting projectors on the market during its CES 2022 presentation. With The Freestyle, the company is on the one hand competing with many smart speakers, but on the other hand doing something very unique. Namely, where with this smart speaker you can just listen to music and use a smart assistant, you use this device mainly for watching content. The Freestyle is a portable projector that you can take with you wherever you go, so you can watch your favorite movies and series anytime, anywhere.

This is partly due to the fact that The Freestyle can rotate up to 180 degrees. So you can project the screen on the wall in the kitchen, but on the ceiling in the bedroom. And if you have a wall left over in the garden, it is even possible to angle it. Samsung has applied a special technology, with which the image is optimized always and everywhere. So it doesn’t matter if the wall is white, yellow or purple: you just get to see the right colors. The image can be adjusted between 30 and 100 inches and the software ensures that the image is always straight on the wall.

Furthermore, The Freestyle can therefore also be used as a smart speaker, which of course also immediately shows that the speakers are in the device itself. There is a battery in the device, so you can take it anywhere. Samsung provides consumers with a special cap for the projector, so you can use it as a colored lamp at the time when you are not watching a movie or series. Add to that the ability to stream your television screen to The Freestyle and you know we’re dealing with a delightful gadget.

As far as I’m concerned, The Freestyle is already one of the gadgets of CES 2022. Why? Because it’s practically a Philips Hue bulb, smart speaker, outdoor projector and television all in one. From January 20, 2022 it will be possible to order it in our country and from February 14 it will actually be for sale.

The only thing missing is a price tag for our market. Consumers in the United States can already get started with the Samsung projector by pre-ordering it. Although they will have to put down a sum of, hold on, $899.99 for that.