“Yes indeed, the Mac mini can be a lot smaller” they cried at Snazzy Labs. They put their money where their mouth is and came up with their version of the Mac mini. Or should we say “Mac micro”? Because the smallest Mac ever, got even smaller.

Quinn Nelson of Snazzy Labs wanted to make a really small Mac Mini and he succeeded. After some tinkering, he came up with a miniature version of the Mac mini. Miniature? Yes, because the ‘Mac Micro’ he presented was no less than three-quarters smaller than the original, without compromising on connectivity or performance.

How did Nelson go about this? First, he removed all the components from the original enclosure. He then moved them into a smaller housing. A 3D printer provided the solution.

Since the power supply is just about the biggest component in the Mac mini, Nelson replaced it with a MagSafe 2 connector from a 2015 MacBook. He powered the Mac micro by connecting it to a Microsoft Surface charger. 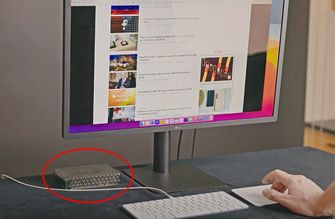 What might surprise you is that Nelson also removed the fan. “All of the extra heat management that Apple had added can be removed without issue,” he stated, “since the MacBook Air M1 has the exact same setup and can also do without a fan.”

The M1 Mac Mini is largely composed of components from the old Mac Mini’s parts bin…the biggest of which is this hilariously overkill: a 150 watt power supply. The same goes for the cooling. Now that these monster components have been removed from the enclosure, we are left with a very slim logic board on which all the IO is soldered directly to the PCB,” Nelson said.

Nelson ended up keeping “Mac Micro,” which is a whopping 78 percent smaller than the Mac mini. So small, in fact, that it can easily be placed behind a monitor. This leaves you with even more space on your desk, which is probably why most people buy a Mac mini.

Did it turn out to be a beautiful machine? No, it didn’t. But everything works as it should, and Nelson thought it was a fun project, and despite the lack of any “Apple aesthetics,” the project was completely successful. Unfortunately (or fortunately), Apple will probably never release an even smaller Mac Mini, because the market for such a machine is already small.

Make your own Mac micro

Want to get started with a project like this yourself? Then you don’t have to reinvent the wheel because all the 3D printer files for the enclosure can be found here. In addition, you can see how everything worked out in the video below: