WhatsApp is going to look a little different soon for people using iPhones. The latest beta version for iOS, the operating system for smartphones, shows the changes.

Version 22.7.0.76 of WhatsApp features a number of minor UI changes. There are no new features, but the application features a modified dark mode, among others.

Via WABetaInfo, the website for all developments around WhatsApp, the changes come to light. So, as mentioned, there are no new features, but a few minor changes are made to the UI of the application.

What is UI anyway?

UI is an abbreviation for User Interface. The UI of an app or website is best described as the user environment. Not just the design, but also the way certain elements work. Thanks to a UI, apps not only look good, but they also work fine.

Among other things, participants in the beta program will have access to a dark mode that is slightly darker than before. Where the icon bar at the bottom of the screen previously tended toward gray, it now flows neatly into the rest of the design.

WhatsApp is not only implementing this change in the Chats screen of its iOS app. iPhone users will also notice in Settings that the navigation bar is darker. 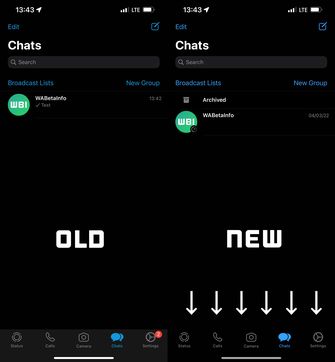 When WhatsApp will make the changes available to all iPhone users is currently unknown. However, we do know that such an addition in the beta version often shows that developments are at a far stage. The chance that you will be able to use it soon is therefore quite high.

When the time comes, WhatsApp will roll out yet another addition of the year. Previously, the company introduced, for example, a way to make backup copies more secure, voice messages were addressed and the company made the change below.

Want to stay up to date with everything the app has to offer? Then this page on our website is recommended.