Beam me up Apple! You may be saying something like this in a few years with a new gadget. The company is filing a special patent application.

Tech companies file many patents for their latest innovations. A lot of those patents remain just drawings and we never see them again. Now Apple has filed a special design, looking closely at Star Trek. The big question, as with other patents, is whether it will actually ever make it to market.

A new way of listening to music

Apple is one of the major players in the headphones and earbuds market. With both its AirPods and Beats in its portfolio, it brings many different models to the market. As such, the company seems to be looking at how it can innovate audio gadgets. You may soon be listening to music in a whole new way, courtesy of Star Trek, reports Apple Insider. In the series, we saw something like this before.

Apple has filed a new patent called “Wearable Device with Directional Audio,” or in flat English, “wearable device with directional audio.” OK, in English it sounds a little better anyway. It means that you can attach the gadget to your shirt and then be the only one to hear the sound, without wearing headphones. 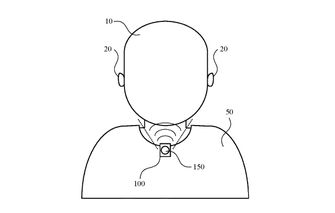 A drawing that accompanies the patent application just gives us a better idea of the words. We see a speaker in someone’s neck. “Such sound waves can be focused by a parametric array of speakers that limit that audibility from others. Thus, the privacy of the audio to the user can be maintained without requiring the user to wear a headset on or in their ears,” Apple describes in the patent.

Apple also writes in the patent why they see this device as a solution over headphones. For example, this way it is easier for the user to hear ambient sound and at the same time be able to communicate with others. It is then not only for music, but also for communication with others. Therefore, it is possible that the gadget also has microphones and can connect to other devices. It may also have sensors to detect characteristics of the user.