Fair is fair, the new sets featuring Princess Peach that are part of LEGO Super Mario were announced a while ago. There was the reveal on March 10, but then we somehow missed it. Fortunately, there are now moving pictures and we can still take in the news.

The new LEGO Super Mario sets revolving around Princess Peach are scheduled for August 1 this year and, as you’ve come to expect, will bring a lot of new features.

Should you want to take advantage of the new features that Peach brings, score the starter set. This one gives you the ability to get it started with Peach figure. What’s unique about her is that she can eat fruit during her adventures to earn extra coins that way. Should you want to have a grand adventure with her, there is the castle set. This is the most expensive expansion of the set and allows you to build a beautiful castle. This is based on the castle from Super Mario 64. Check out the video of the new content below.

As you can see, you get many more sets to purchase. There are seven in total. The castle is the most expensive of them all, but there are also a few sets that cost around sixty euros. But you also have sets that you can buy for a few tens of euros. Of course with Peach you can also work with older sets that LEGO has released before. So if you have those, you can now go and make big levels and play with them. Of course it is also possible to use ‘normal’ LEGO in your levels and let your creativity run wild. 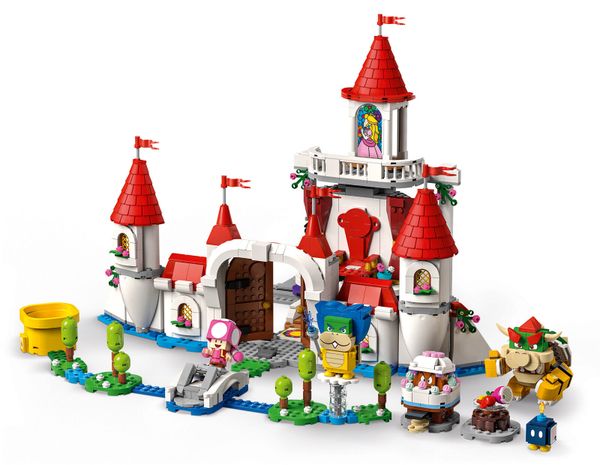 This is the third series released by LEGO in collaboration with Nintendo. So it started with LEGO Super Mario. Then we got the Luigi set. And so now it’s the turn of Peach. What comes next? Perhaps Toad will have his own adventures. Want to know what we thought of the previous series? Then read our review here.