Mario Kart 8 Deluxe is one of the biggest success stories of the Nintendo Switch. Anyway, the kart series has always been good in terms of sales figures. In the past, a lot of other developers have tried to get a piece of it. But today there are not many alternatives. That’s why it’s nice that Square Enix is trying with Chocobo GP.

Chocobo GP is very similar to Mario Kart 8 Deluxe on the Nintendo Switch. Just like in that game, you get to interact with a number of different characters and tear through colorful environments. In the process, you pick up various powerups along the way, which you can use to make life miserable for your opponents. Here are the points that stood out.

Chocobo GP on the Nintendo Switch

If you like games with a cheerful visual style, then Chocobo GP on the Nintendo Switch is the right place for you. It’s a game with a fine cartoony style and uses cheerful colors on the various tracks. They splash finely off my OLED screen of the game console. The various effects also increase this cheerfulness, making it an ideal game to play from young to old. 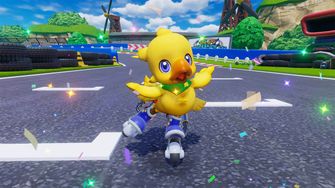 This will make you happy, right? (Image: Square Enix)

Plenty of characters in Chocobo GP

In Chocobo GP you can get to work with a reasonable load of characters. Most of these are variations on the Chocobo, but there are also characters from different games. For example, Final Fantasy VI delivered Terra, while Final Fantasy IX has Vivi and Steiner in the game. At launch, you can also score Cloud and Squall from parts seven and eight. Each character has their own vehicle, so there is a distinct difference. But more importantly, everyone has their special skill to defeat others with. In this way, it pays to try out various characters. 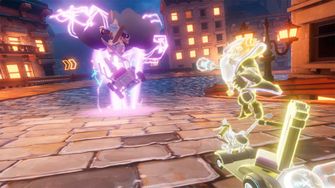 Playing with forces and environment

And then once you’ve chosen your character, you can go wild on the track. One of the nice things about Chocobo GP on the Nintendo Switch is that if you’re a little good at it, you have the ability to reasonably drive away from opponents. You don’t have a blue shield like Mario Kart 8 Deluxe or other games in the series. If you get a little handy with drifting, take the speed boosts and time the jumps right, you’ll increase your speed and fly away from the opponents. But when you are close to others, then you grab the powerups to attack them and in this way get yourself close to them again. 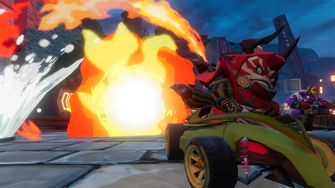 Use your powerups (Image: Square Enix)

In Chocobo GP on the Nintendo Switch, you have a Story mode sitting there. However, this one is a bit on the dull side. The stories told in between are drawn out and don’t have a whole lot to offer in terms of content. But you have to go through them if you want to unlock certain content. However, it could have been so much better and more interesting.

Does lose out to Mario Kart 8 Deluxe

OK, I’ve compared Chocobo GP to Mario Kart 8 Deluxe quite a few times. And that makes sense. Still, it’s not entirely fair, because if we put the two directly against each other, Mario Kart does come out the clear winner overall. That Nintendo Switch game just drives better and is more fun to play. Therefore, you should not see this game as an alternative. Maybe more like a sop until Nintendo finally releases a ninth installment in the kart series. 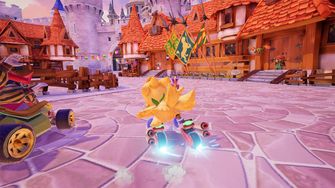 Chocobo GP will be available on the Nintendo Switch starting March 10. With that said, it’s good to know that a Lite version will be released for free. That way you can see for yourself if the game is for you. Want to read more about gaming? Visit our overview page here.