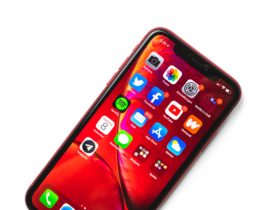 Apple’s Weather app carries hidden features (these are them)

The iPhone 14, the smartphone whose announcement we can only expect in about nine months or so, is already being discussed busily in the corridors. For example, it is being revealed for the second time that the device is saying goodbye to the notch.

Whereas previously it was only mentioned that Apple was planning to do this, there now seems to be more information on the table. Face ID is going to disappear from sight and be located below the display starting this year.

The reason the iPhone 14 can finally say goodbye to the notch has everything to do with Face ID. Incidentally, this is also the reason why the large notch in the screen is still there today. Earlier, reliable analyst Ming-Chi Kuo made it clear that it will make room for a hole-punch variant. A variant that has been found for years on various Android devices and makes the screen-to-body ratio a lot larger.

I am able to corroborate information regarding a hole punch camera for the pro models of the iPhone 14. Face ID hardware will be placed under the display. As a reassurance to any concerns, the functionality of these sensors have not been negatively affected by this change.

According to another source, in the form of DylanDKT, the notch is disappearing as Apple has a breakthrough in Face ID. The technology, which is used to unlock iPhone models, will disappear under the display starting this year. The iPhone 13 featured, for the first time since 2017, a smaller version of the current notch which was immediately seen as the first step towards a hole-punch. A solution that will make its appearance in the iPhone 14.

The reason Apple chooses to keep a small notch though has everything to do with the quality of the current in-screen selfie cameras. The technology is there, but it is not yet good enough to completely replace the current model. As for the sensors needed for Face ID, the situation is evidently different. Although, given that it is not official, the news should be taken with a grain of salt.

Curious about what we know about the iPhone 14 so far? Then be sure to read the article above or check out this page on our website.