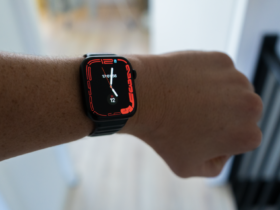 Apple’s Mac Studio has a new processor that has a lot going for it, but how good is it really? According to the iPhone maker, the so-called M1 Ultra is more powerful than best Intel processors or even the Nvidia RTX 3090 graphics card. But research shows that Apple is giving a distorted picture.

That research was conducted by the editors of The Verge, who used benchmark Geekbench to do so. Apple claims that the M1 Ultra is better than many a competitor in terms of “relative” gpu performance. And that while the Apple Silicon in the Mac Studio also consumes quite little power.

Apple displays that in the comparison below. However, the scale on the left is limited to what the M1 Ultra can do. It does not show that the graphics processing unit of Nvidia has much more to offer. What it does show is that for much less power consumption, you get to maximum performance much sooner with the M1 Ultra. 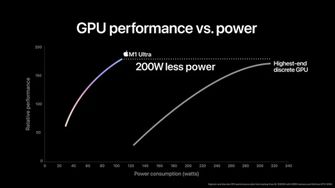 The Verge has subjected the Mac Studio to a review and in the process used Geekbench to objectively measure performance. It shows that the RTX 3090 performs much better in a PC. For example, the game Shadow of the Tomb Raider runs at a maximum of 142 frames per second, at 1080p resolution.

For comparison, at the same resolution, the same game on a Mac Studio with an M1 Ultra achieves 108 frames per second. In the chart, Apple does not show the full, potential power of its competitor. The M1 Ultra stops at 320 watts of thermal design power (TDP). The RTX 3090 stops at 350 watts and can even go higher than that when needed.

The annoying thing about this story is that Apple is giving a distorted picture of the situation. The line in the above chart at Nvidia actually goes a lot higher. And that’s while Apple doesn’t need to do this at all, because the existence of the M1 Ultra already gives enough reason for wonder.

Not only did Apple succeed in bringing together two dedicated chips (cpu and gpu) in a nice way, it also did what other chip manufacturers had failed to do so far: combine two separate processors into one. It also delivers decent performance and does what it promises. Then you don’t really need a inflated story.