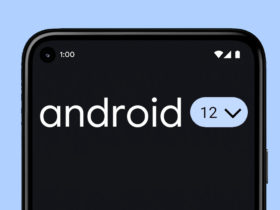 How the Samsung Galaxy S3 looks with Android 12 on board

CES 2022 is an excellent stage for the OnePlus 10 Pro to shine. Yesterday, the first images of the new flagship appeared and today OnePlus brings out all the specifications.

That’s true for the vast majority, by the way, as the company isn’t throwing everything on the table just yet. OnePlus has withheld three specifications, which manages to keep the phone still a tiny bit mysterious. But it’s not very impressive.

The specifications of the OnePlus 10 Pro

The great thing about a company like OnePlus is that it is usually so enthusiastic about its own products, that the actual presentation of them is already not very exciting anymore. This is certainly true for the OnePlus 10 Pro, which has not only leaked out, but many details of which are also seeing the light of day through official channels. After the design of the flagship was revealed yesterday, today we see what specifications the device brings with it.

The OnePlus 10 Pro offers the following:

The list looks good, but can’t be called very exciting. Although we must honestly admit that the 5000mAh battery and fast charging capabilities do take the OnePlus 10 Pro to the next level already. Charging with a power of 80W and 50W wireless, will no doubt bring a pleasant user experience. 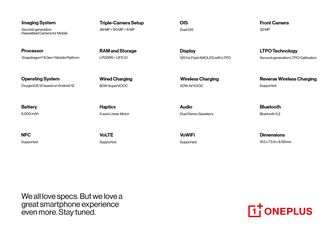 What the flagship has to offer you (Image: OnePlus)

Not everything known yet

OnePlus is releasing a lot of specifications of the OnePlus 10 Pro, but there are a few things three are missing. Three of them are particularly important as far as I’m concerned. For example, we don’t know exactly how big the 120Hz Fluid AMOLED display will be, we have no idea how much working memory/storage capacity will be associated with the smartphone, and we have yet to be told exactly what lenses have been used. This will no doubt happen next week during the presentation, but in those areas we are officially in the dark. Officially, because we have already heard in the corridors what we can expect.

It seems very likely that the smartphone will feature a 48-megapixel wide-angle lens, a 50-megapixel ultra-wide-angle lens and an 8-megapixel telephoto lens. Along with this, the dimensions of the smartphone point towards a 6.7-inch display, which has also been discussed earlier. So the only thing we don’t know yet is how many GB of working memory the OnePlus 10 Pro carries.

We’ll find out more on January 11, when the smartphone is unveiled. And maybe we will finally see and hear something about a regular OnePlus 10 model. Because as far as that goes, it remains very quiet.