How WhatsApp wants to use your profile picture to send notifications

A popular feature of Reddit has been revamped. The option now does exactly what you should expect when you press the button. The feature in question is the block button. Previously, it worked more like a mute button, but now it actually blocks a user. That should keep the site fun and safe for everyone.

In the past, when you used the block button on Reddit, you no longer saw that person’s posts in your personal summary. But now the button works almost like it does on other social websites. If you now block someone, then that person will no longer be able to see your posts and thus respond to them.

It’s a little crazy that the blocking feature previously worked in a different way. It was an ineffective method of blocking someone, since that meant they could still respond to your posts. If you were then harassed on the platform, it wasn’t like the harassment suddenly stopped after blocking.

This is now completely different, as you can see in the image above. This is because a blocked user no longer sees the messages from the person who blocked him or her. Instead, you will see that messages and accounts have been deleted. Also, you can’t respond to comments and all profile information is protected. 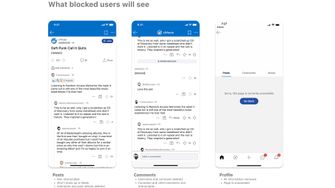 Exception to the rule

There is an exception to the rule, though. This is because moderators can still see posts from users who blocked them, if they are active in a subreddit in which they are moderating. So you can block moderators on Reddit, but that also means you have to get out of a particular subreddit.

On the other hand, users who blocked someone can still see their posts in the many subreddits. The messages are not visible by default and are displayed in a collapsed format. Thus, users can still read what someone says and report someone’s behavior if that person does not stop harassing and intimidating them.